Now home from our trip to Galveston/Houston (Texas) to investigate interest in taking Wetwheels to the USA, I thought I would share our week in the Lone Star State.

It was a packed itinerary, first up on day 1 was an 0700 talk to Seabrook Rotary and more than 50 members, thanks to the charming Edie Houlden, President of Seabrook Rotary for hosting us. 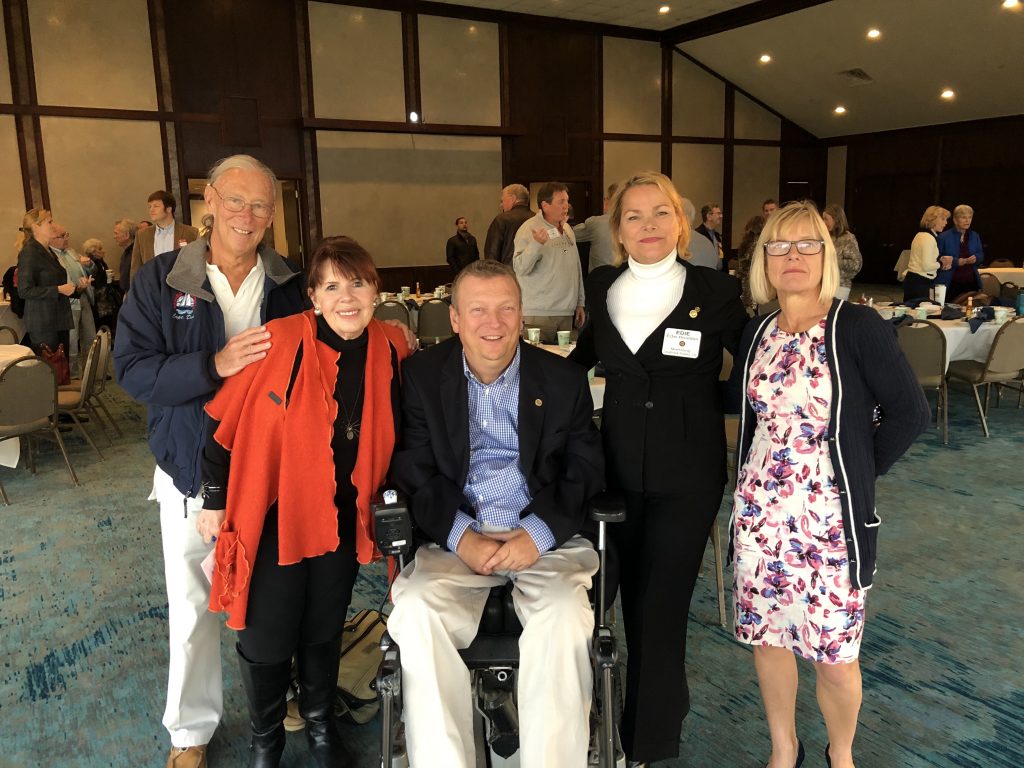 Immediately afterwards we drove up to Houston to meet Her Majesty’s Consul to Texas, Richard Hyde and Elizabeth Ballentine, head of Press & Public Affairs for the Texas Consul office, both of whom were interested to hear about Wetwheels and offered their support and were keen to be kept informed. Not every day you get to see a little piece of England in the USA dressed all over for Halloween. 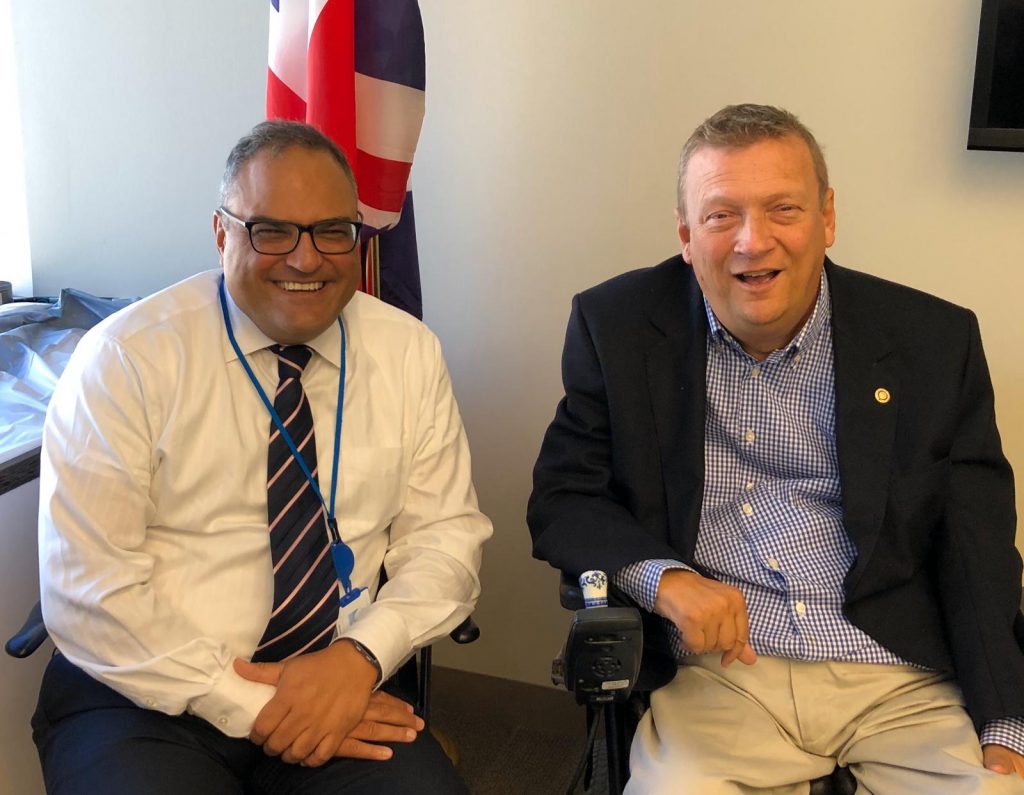 The following day, Keith & I spent several hours at the recently rebuilt Sea Star Base boating facility in Galveston, talking to David Gaston, (Adaptive Sports Co-Ordinator), Tammy Lobaugh (Deputy Director of Sea Star) and other members of their team.  SSB is very similar to our UKSA on the IOW with adaptive sailing programmes and training to all levels. Plenty of Sonars and a great hoist system that doesn’t use a sling called Sure-Hands. A terrific venue and would make an ideal home for a Wetwheels with easy access. 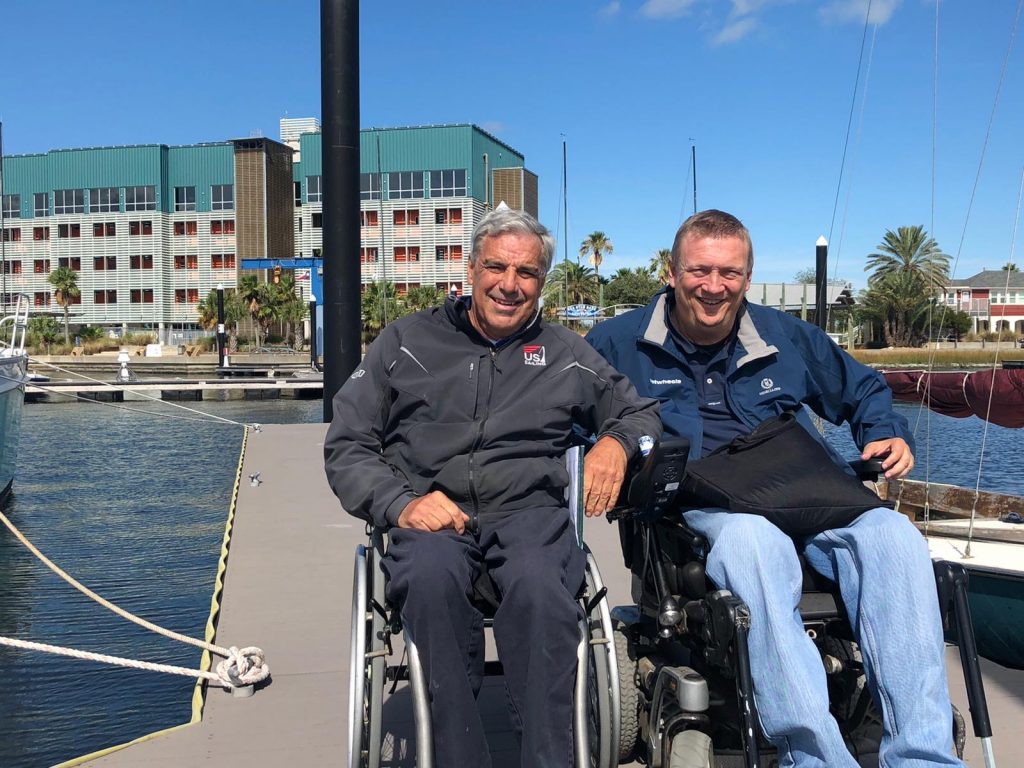 On Saturday 2ndNovember, thanks to letters of introduction from the Commodore of the Royal Southern Yacht Club some months ago, I was given the opportunity to speak to members of the Lakewood Yacht Club in Galveston. Thanks to Commodore Tom Frankum for hosting me and particular thanks to one of my sponsors, Jim Hand, US Marketing Director for Raymarine/Flir for flying in specially from Ft Lauderdale to attend the talk.  Huge thanks also to Aimee Pickett from the Wounded Warrior Project (their equivalent of Help for Heroes) who made the effort to join us and hear the talk. They would make a magnificent partner if we can bring Wetwheels to Texas, they are so enthusiastic and doing some great work with wounded vets. 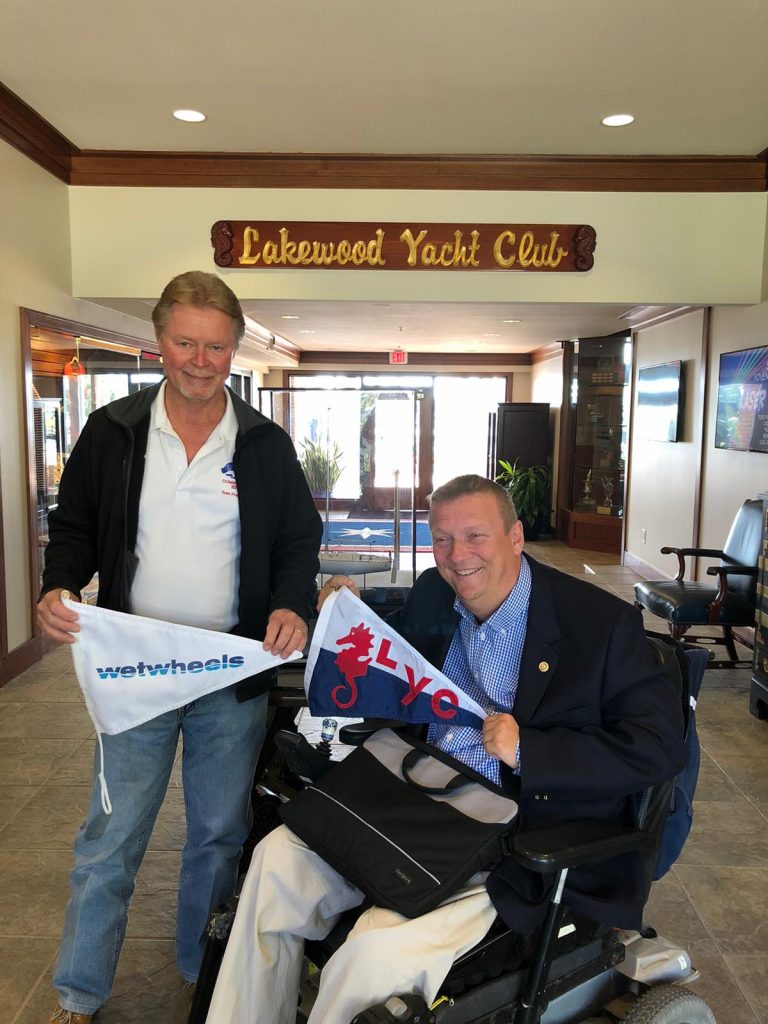 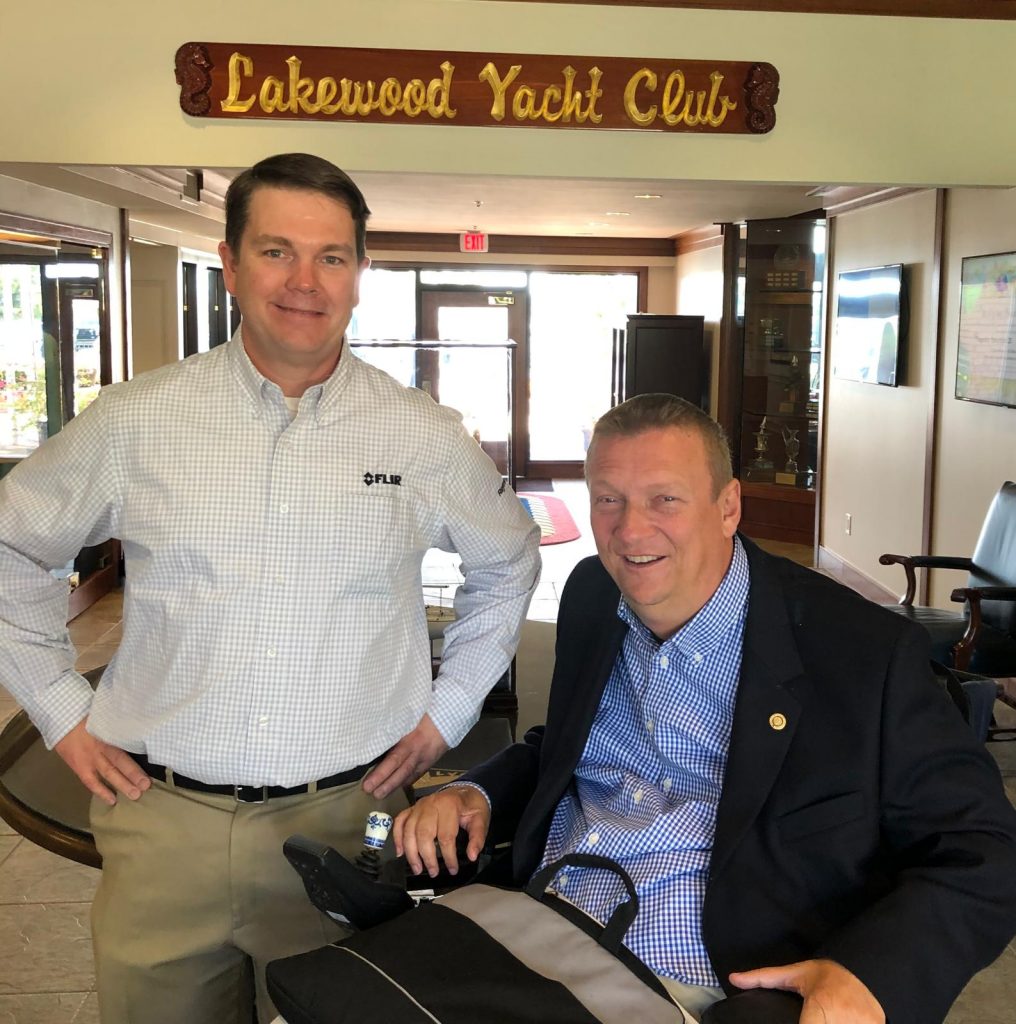 Meanwhile, whilst my son Tim and my skipper Keith drove to Austin to watch the American Grand Prix on Sunday (well done Lewis), I was working and gave my final talk to members of the The Corinthian Yacht Club, what a fantastic setting. Thanks to Commodore Gary Ross, Jack Daniel and Club Manager Stacy for hosting me, a really lovely audience and amazing chicken and tortilla soup..! (My wife wants the recipe). 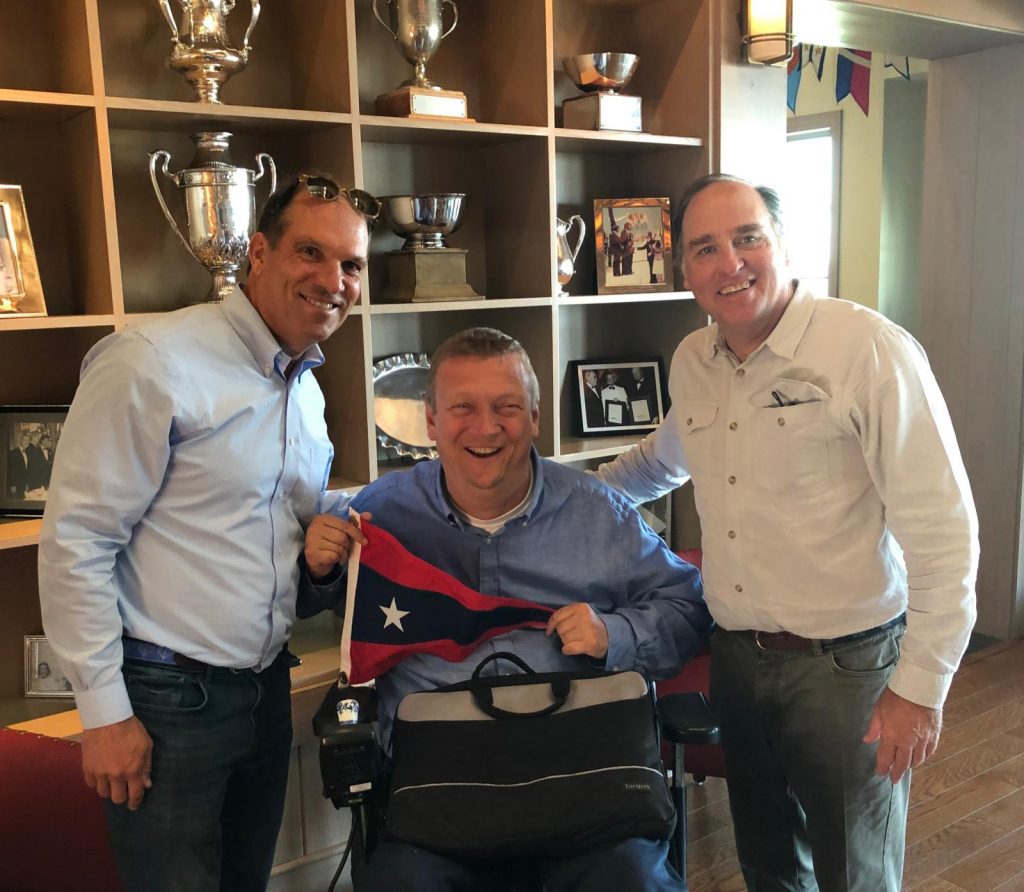 With business meetings and talks over (follow-up now underway), we headed up to Austin for a few days R&R.  On the suggestion of Larry Neuhaus, member of the Corinthian YC in Galverston, we stopped at Camp for All en-route to look around their amazing facility. Larry was one of the founders of C4A.  Like Wetwheels, they have a ‘barrier-free’ attitude to disability, the result is a fully-accessible 206 acre camping and activity facility in the middle of Texas. It was as mind-blowing as it was emotional to see the thought and care given to every aspect of the centre. It reminded me of the Calvert Trust in the UK but on steroids and with deeper pockets. Simply amazing. 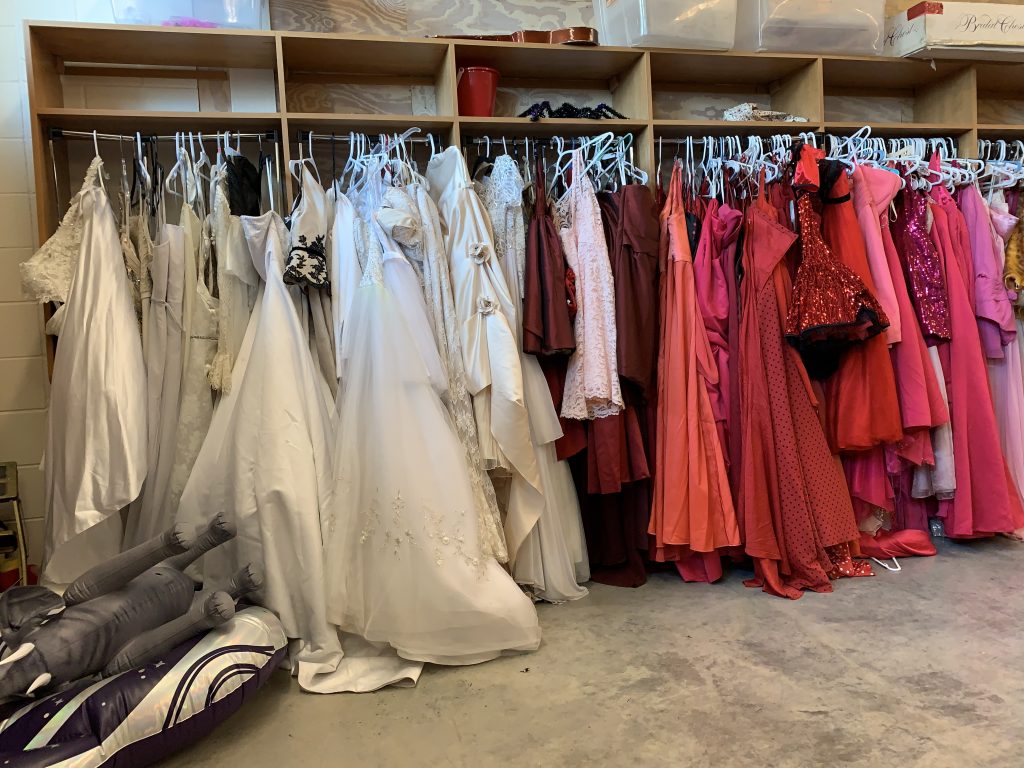 Thank you to Camp Director Kurt and Beth (she’s the one in the dinosaur’s costume..), thank you both for being such great hosts. Camp for All had an indelible affect on me, a genuine affection for what you are doing, it encompasses everything I believe in and everything I strive for to make our world more barrier-free for everyone. Bravo to those who made it possible and those who run it. Bravo. 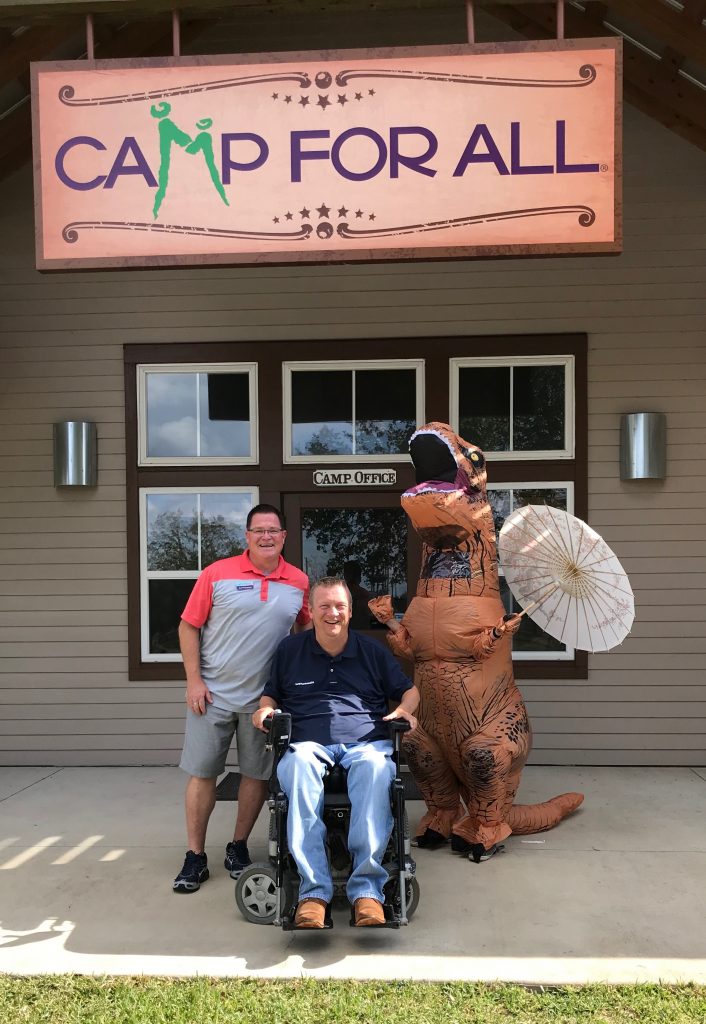 And then it rained and the temperature fell from near 30 degrees centigrade to near freezing. On the positive side, it made our arrival back in the UK much easier yesterday morning.

So will Texas want a Wetwheels? They could certainly make good use of one, there is nothing there similar. They have the perfect location for one, a group of people enthusiastic enough to run one and more than enough disabled participants to operate at capacity. It comes down to money and will.  If the will is there (and I sense it is), then finding the funding should be easy. Certainly the feedback I received from the sailors, the yacht clubs, the disability groups and the key people we spoke to, there is an interest but it will need ownership. The next few weeks and months will be spent determining if Texas will become our first Wetwheels boat outside of the UK.  I also have enquiries from San Diego and Monaco waiting in my InBox so there is a world of opportunities out there.

Final thanks to Neil Wilson for managing the trip and ensuring we were where we were supposed to be at the right time with the added challenge of Galveston hosting 100,000+ motorcycles on the Lone Star Rally that weekend. Thanks also to our Texas ‘fixer’ and proud new mum Dyanna and to Wetwheels skipper Keith & wife Tracey for joining Elaine & I on our Texas adventure. 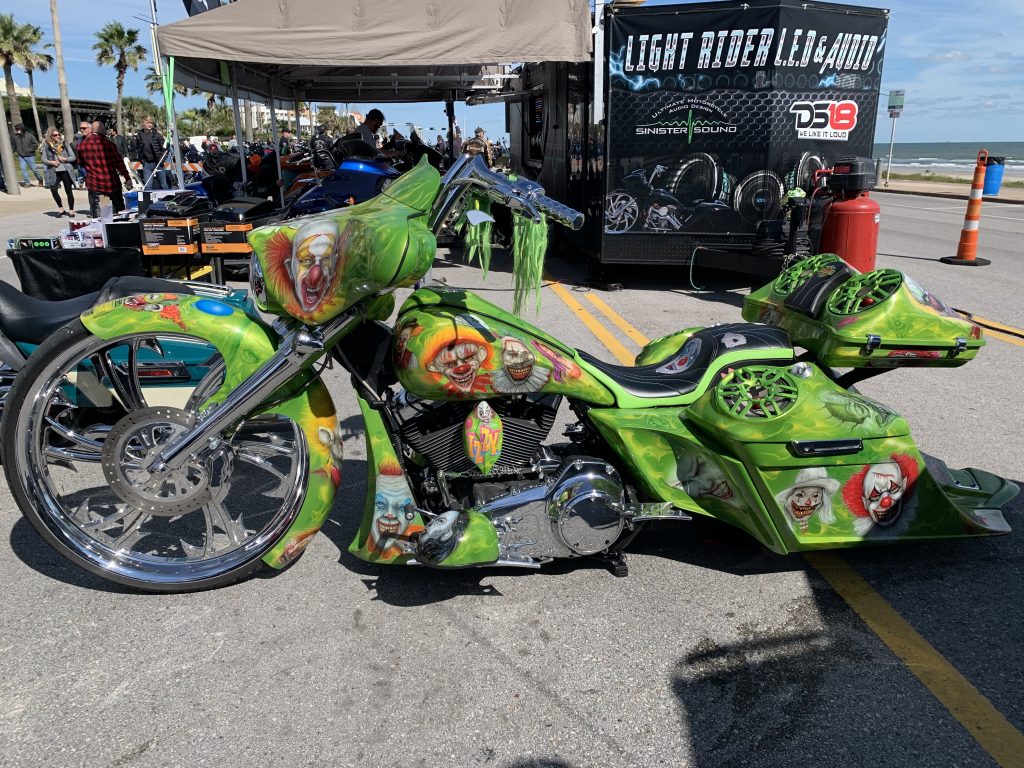