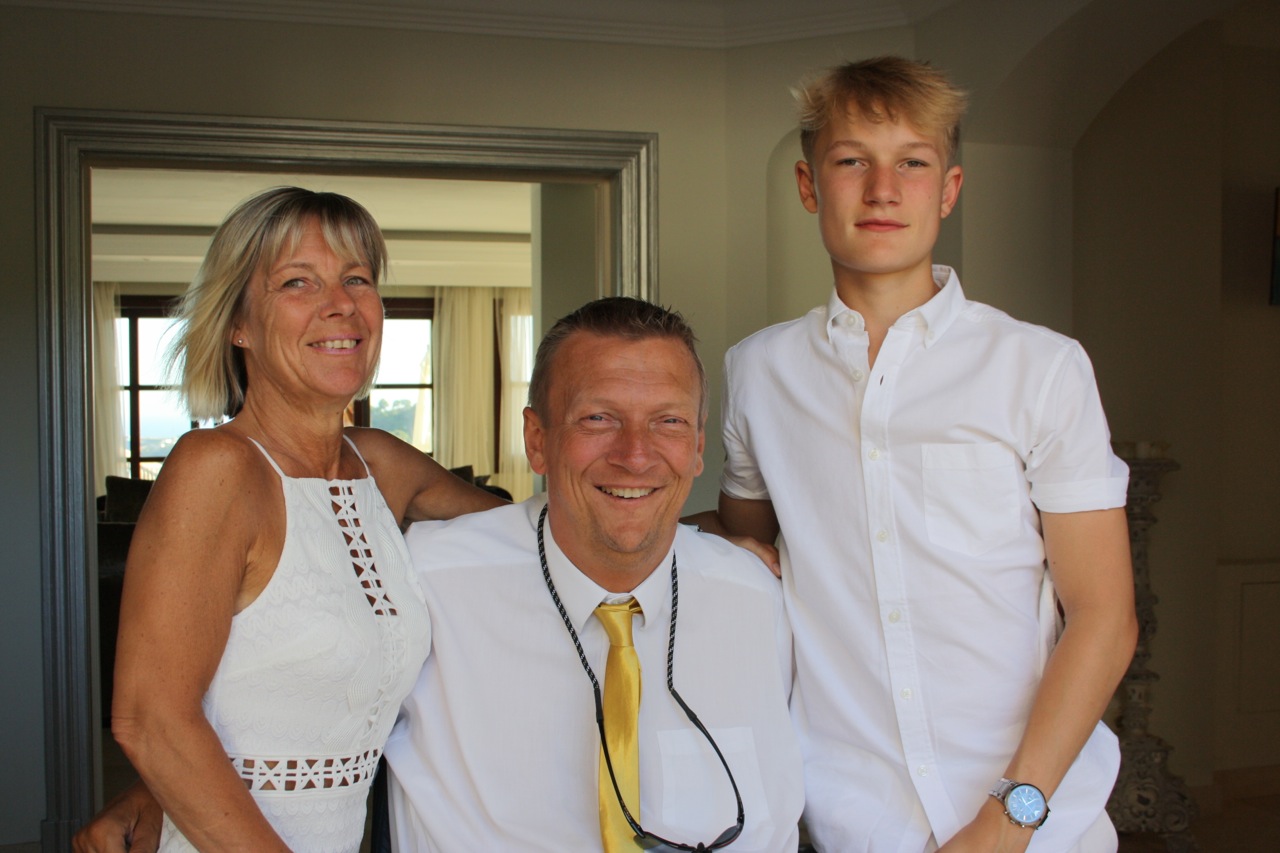 In his own words..

I guess I’m proudest of being a husband to Elaine and a father to Tim. Elaine and I have been married for more than 30 years, she was my nurse in hospital when I had my accident back in 1984, all very romantic. As a family we make a great team and I would certainly not have achieved what I have today without their love and support.

Life as quadriplegic can be tough, not just on me, but those around me, particularly Elaine, but I’m a firm believer in a positive mindset and resilience, armed with those, you have a head-start to achieving your aspirations.

The thought of being unable to sail after my accident when I was 18 years old was almost too much to bear; sailing was not part of my life, it was my life. As I try to explain to people about my affection for being at sea:

..the real magic happens out there, over the horizon. Only offshore can you truly get to understand the magnificence of the ocean, the wildlife, the infinite skies, the sensory overload from a breaking wave; on one hand the feeling of insignificance as a human being, a mere dot on an ocean, countered by this overwhelming sense of being alive, at one with nature. It is a very private and emotional feeling that I only feel when at sea.. 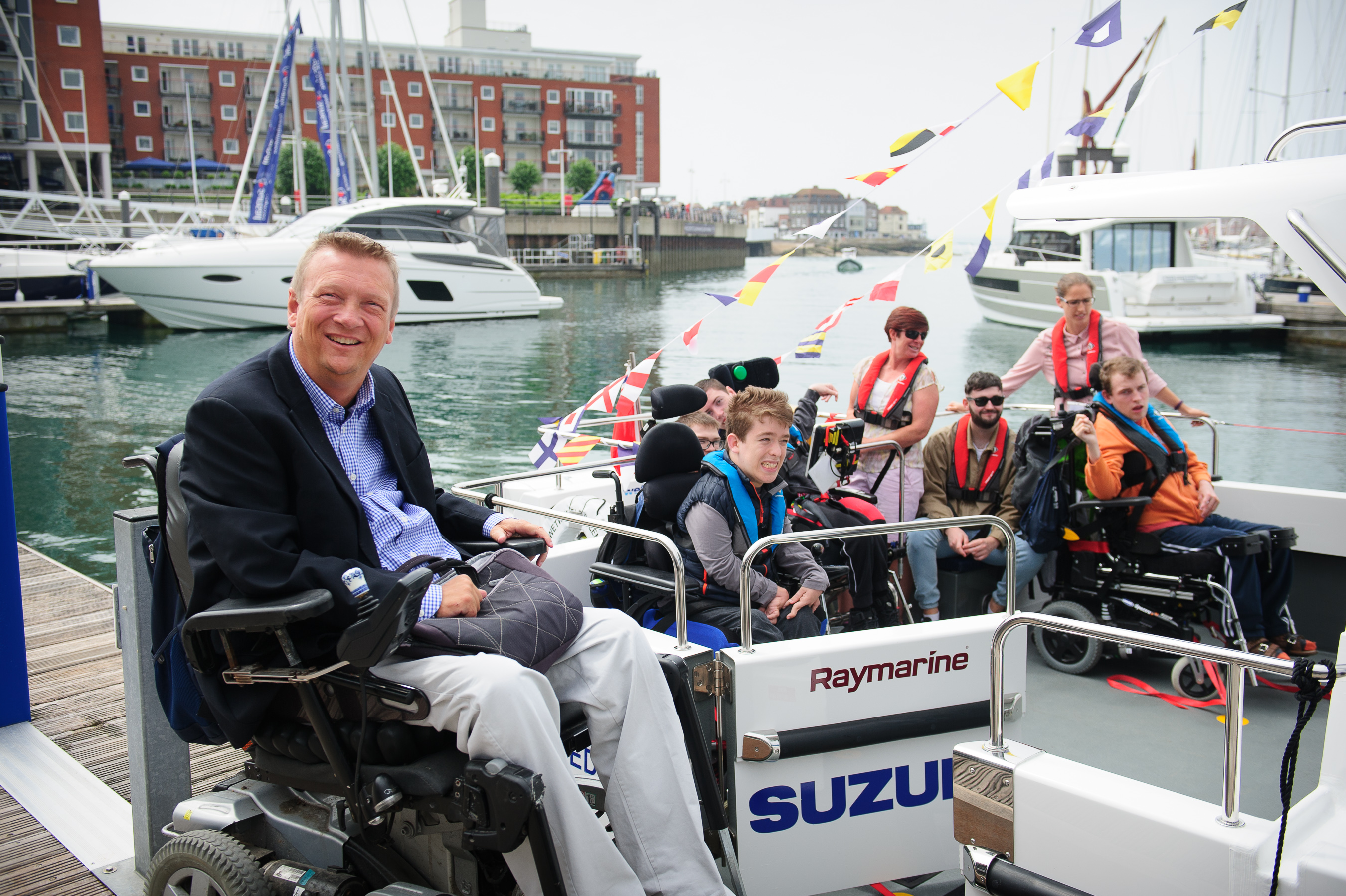 Wetwheels occupies much of my time today but Wetwheels is so much more than a trip on a boat. I have witnessed how Wetwheels not only removes the physical barriers to accessing the sea but, in so doing, we are helping to increase confidence, reduce anxiety and, by making our boats fully accessible, including steering the boat, we are enabling all of our participants to share those experiences with loved ones. Founding Wetwheels and watching the concept grow across the UK and beyond, gives me a tremendous amount of personal satisfaction and makes me feel very proud of my team.

Many of us fail to reach our full potential, whether in our life-goals, relationships, work or sport, this is particularly true for those less able. I have experienced life as a non-disabled person and someone with a high-level of disability, it still saddens me how our built-environment continues to exclude disabled people. The removal of barriers, be they physical, attitudinal or political, creates opportunities for us all to play our part in society.

It’s not about coping with disability; it’s about finding the reserves we all have to achieve our goals in spite of it.

This is Geoff’s story

Geoff Holt had already accomplished much by the time he was eighteen years old. Geoff had sailed across the Atlantic Ocean three times, completed several solo voyages and sailed over 30,000 nautical miles. And then his life changed. All hopes, dreams and expectations of earning his livelihood as a professional yachtsman were destroyed after diving into the Caribbean Sea and breaking his neck. Geoff spent a year in hospital and then, with characteristic spirit, he retrained in a different career and went on to lead the marketing department of an international firm of chartered accountants for 12 years. Geoff later became a qualified auctioneer and valuer (specializing in early European ceramics) but eventually returned to his first love of sailing.

Geoff entered the history books in 2007 when he sailed solo around Great Britain.

Recognition of Geoff’s achievements came swiftly. He was voted BBC South Sports Personality of the Year (2007); short-listed for Yachtsman of the Year (2008); received a British Airways Great Briton Award and the RYA Francis Elkin Award (2009). In June 2010, Geoff was awarded an MBE for services to disabled sailing and then in early 2011, Geoff received the coveted YJA Pantaenius Yachtsman of the Year that Geoff considers the ‘Knighthood of Yachting.’ In November 2015, Geoff won the presitigous business award in recognition of his work as founder and CEO of Wetwheels – the Stelios Award for Disabled Entrepreneurs in the UK.

Geoff is passionate about creating opportunities for others facing their own challenges in life through a long association with the Paralympics and the charity RYA Sailability of which he was the inaugural Chairman and Trustee commencing in 1995.

Geoff’s autobiography ‘Walking on Water’ was published in 2008 to wide acclaim. He also writes monthly columns in sailing journals and is a presenter on BBC Radio Solent’s H2O Show alongside Sir Robin Knox-Johnston.

Most recently Geoff has designed and built Wetwheels, the world’s first wheelchair accessible powerboat so disabled people can have an opportunity to try powerboating. Based at Portsmouth, the 30ft catamaran regularly takes groups of disabled people for rides in the Solent though the Wetwheels Charitable Fund. In June 2012, Wetwheels and Geoff took part in the Queen’s Diamond Jubilee Pageant on the Thames. Geoff instigated the formation of a new charity, the Disabled Powerboating Trust that funds powerboating opportunities for disabled people and he has become its first Ambassador. Geoff is passionate about “giving back” and supporting community and charitable initiatives where possible. He is also Patron of Southern Spinal Injuries Trust; Rose Road Association; Lymington Sailability; New Forest Sailability; Cowes Sailability and Le Tournoi (Jersey). 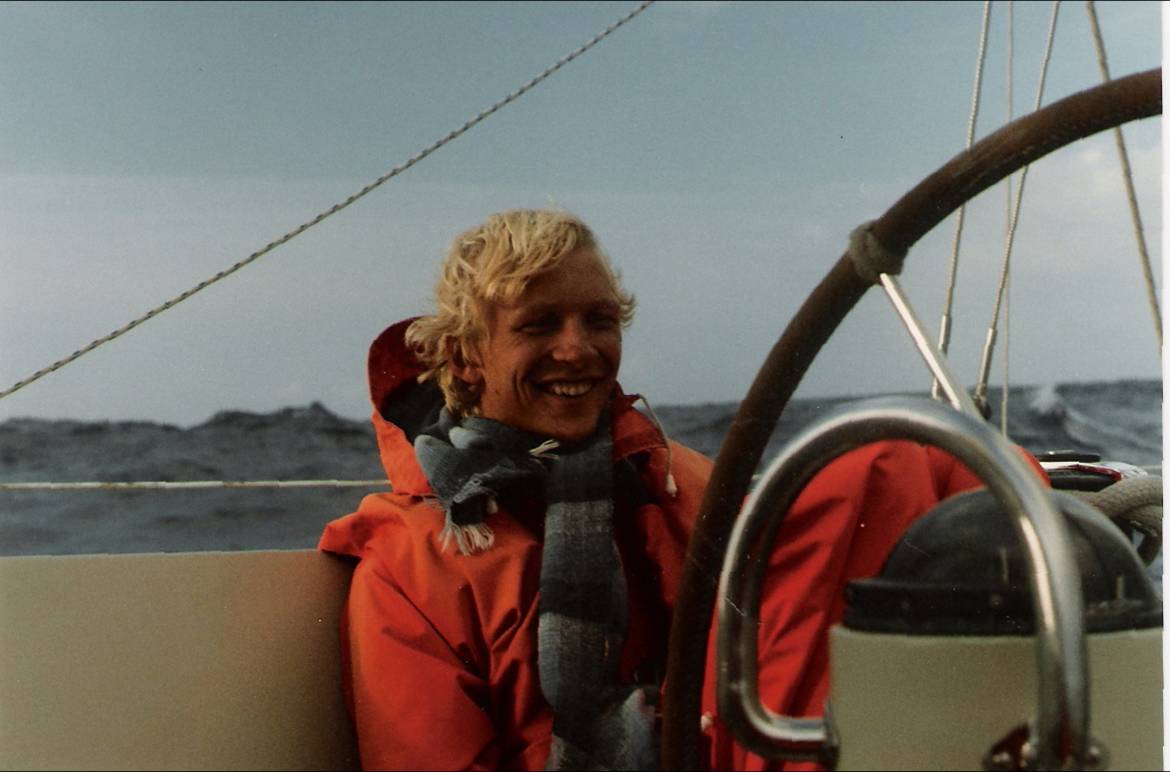 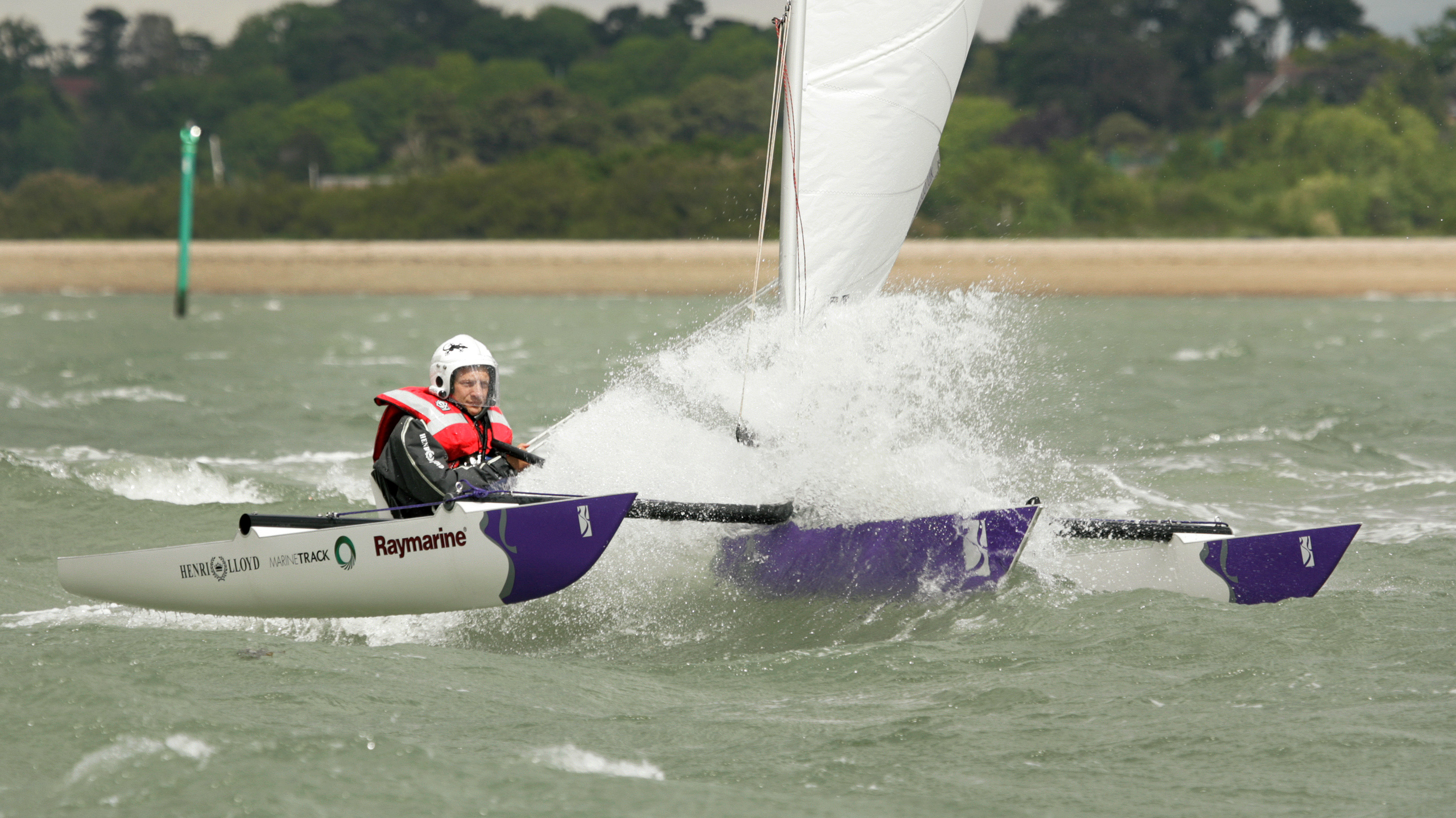 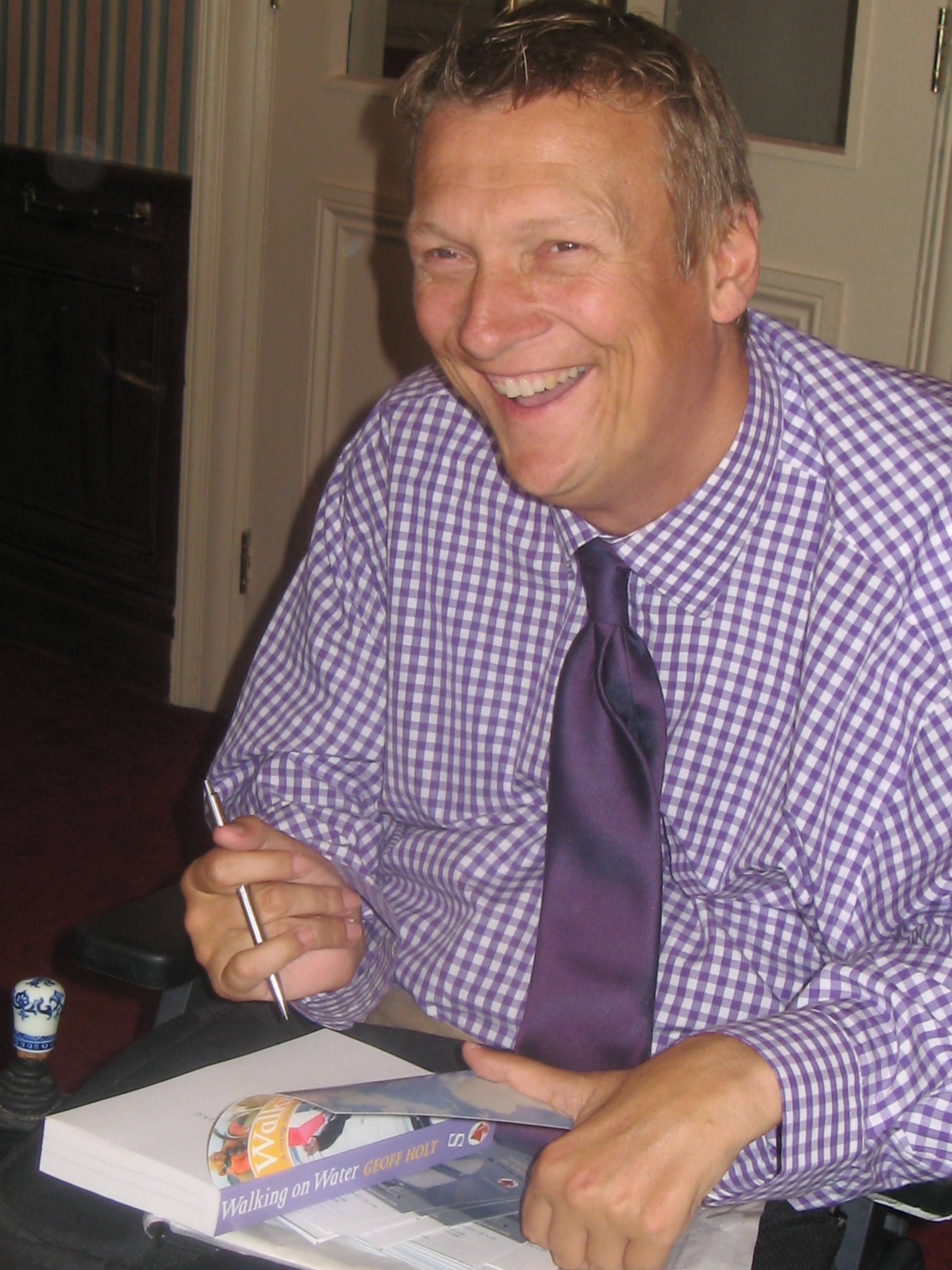 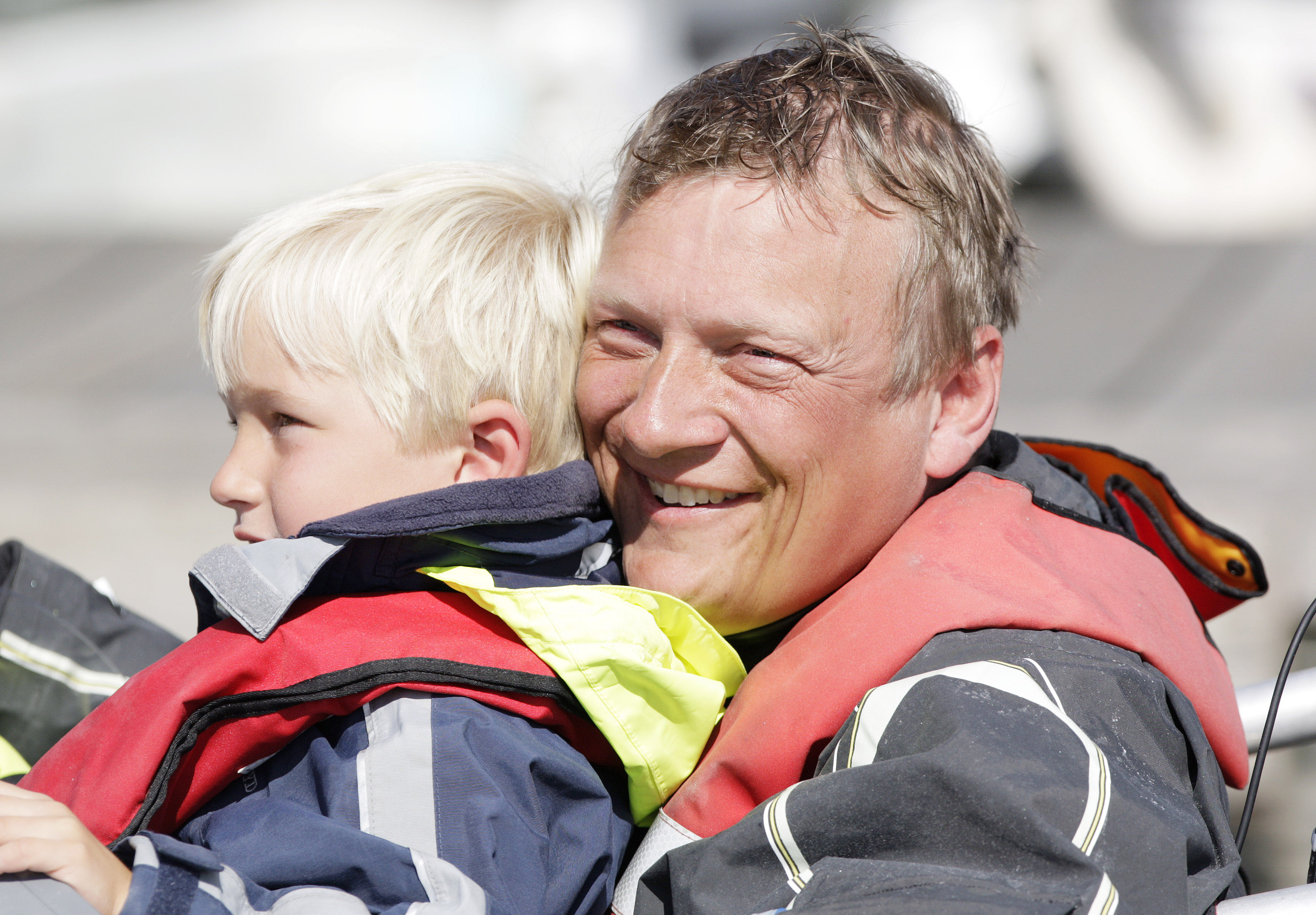 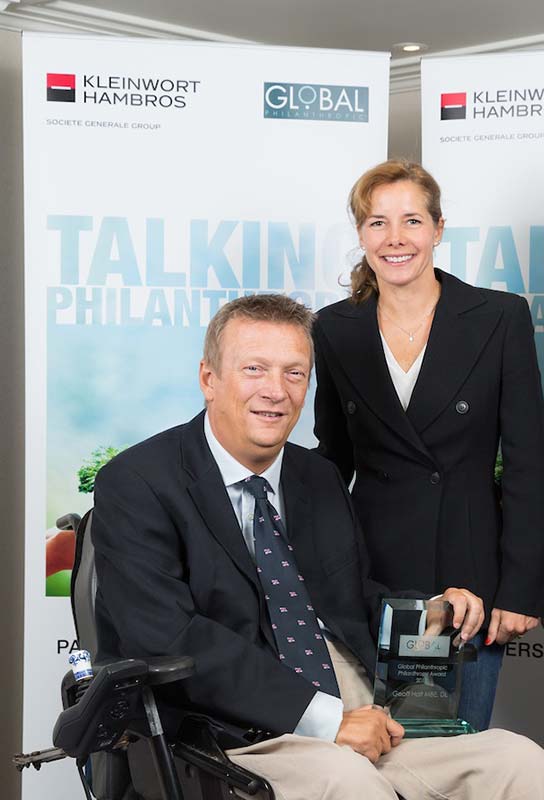 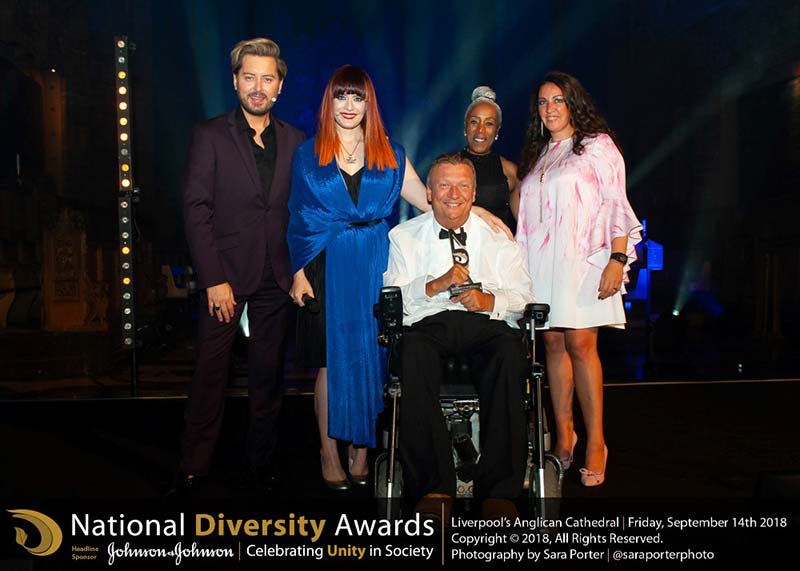 Awarded by the National Diversity Awards.

Awarded by the Spinal Injuries Association. 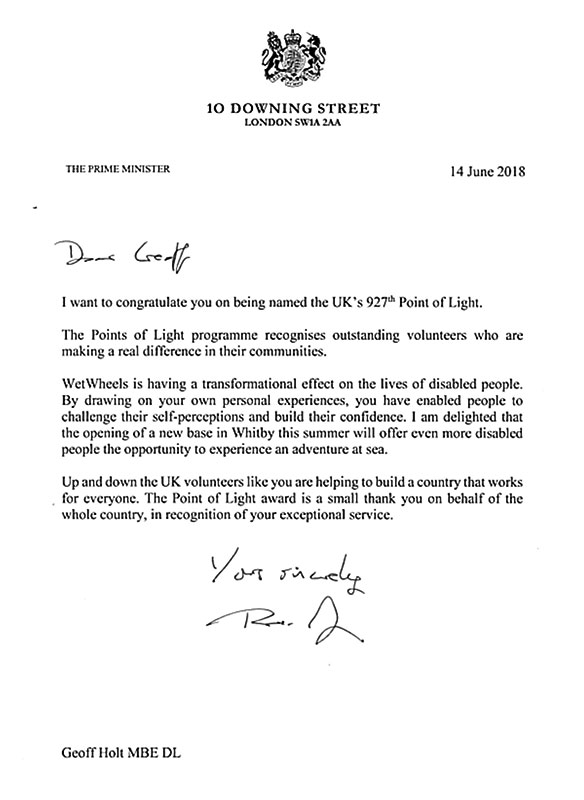 Awarded by the British Prime Minister – Teresa May.

Awarded by the Federation of Small Businesses.

Disabled Entrepreneur of the Year 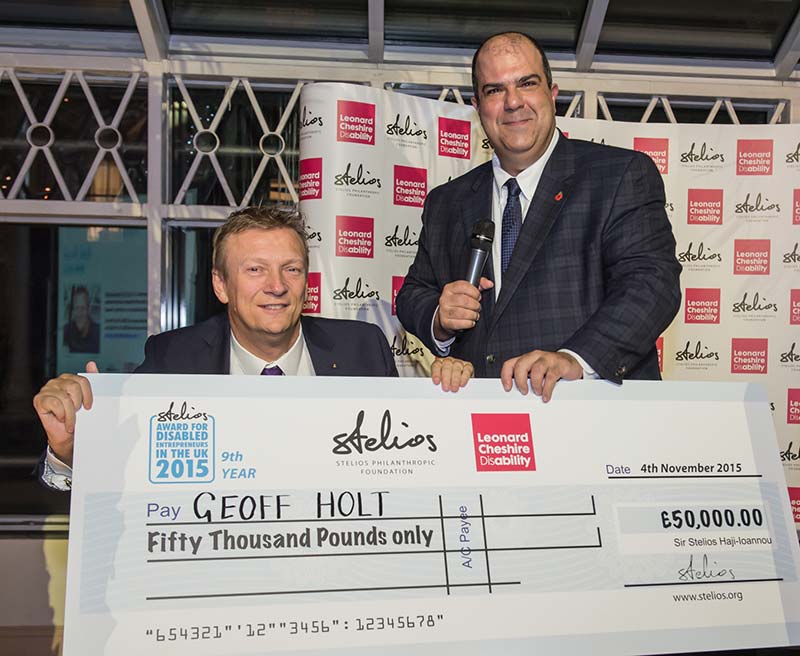 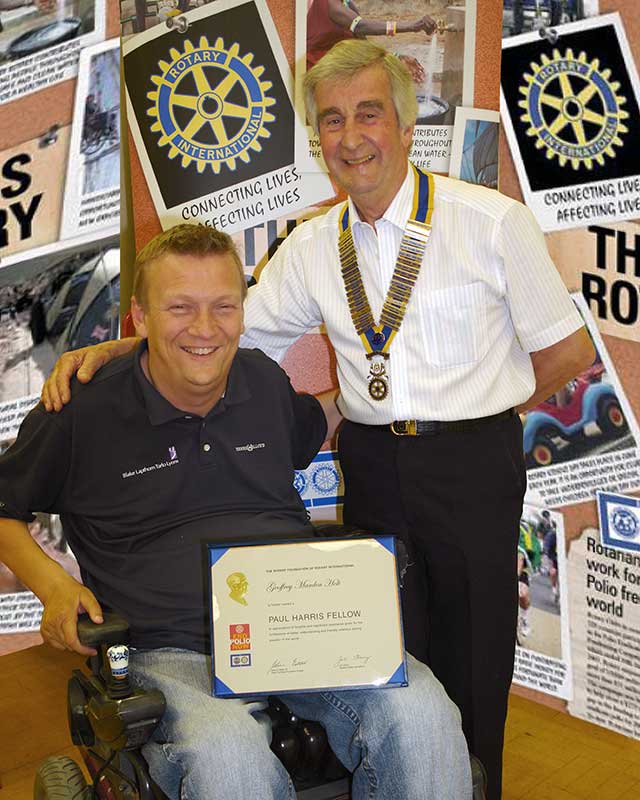 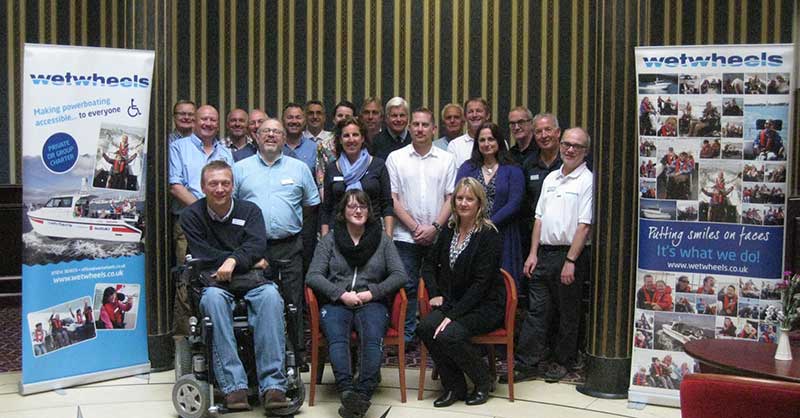 Geoff is the founder & CEO of Wetwheels, a Community Interest Company (CIC) serving the local community. Using fully accessible boats Wetwheels can provide boating opportunities for people of all ages and of all abilities. There are a range of options; from educational and mentoring programmes to sport and experiential trips, there is something for most people.
www.wetwheels.co.uk

Awarded by Her Majesty, The Queen. 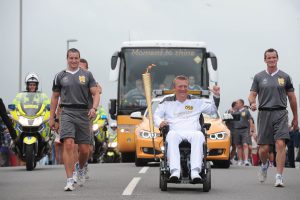 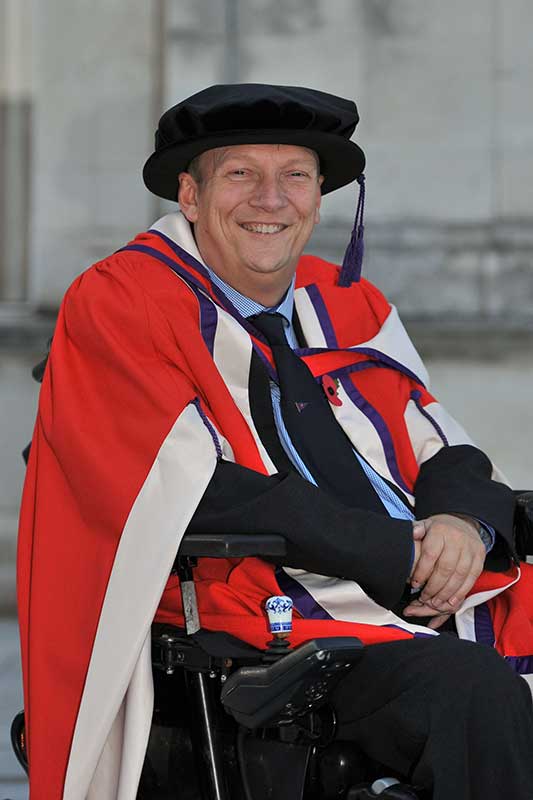 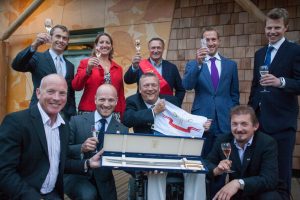 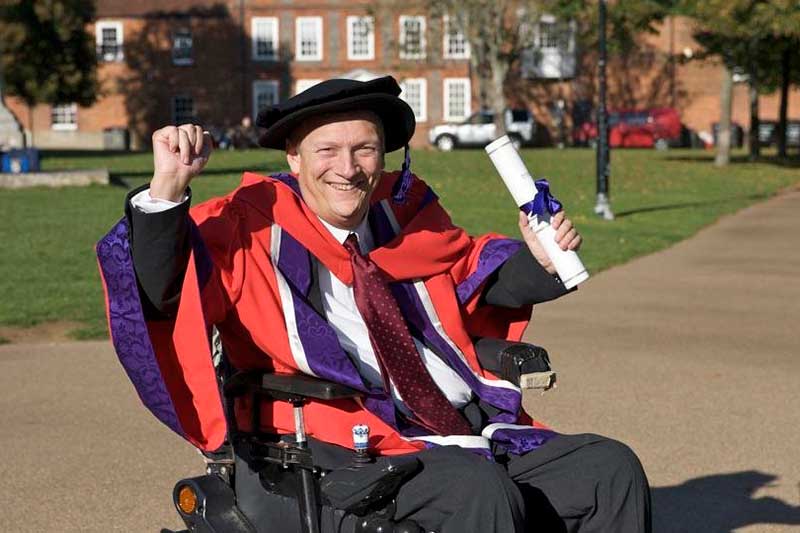 Awarded by the University of Winchester.

MBE for 'Services to Disabled Sailing' 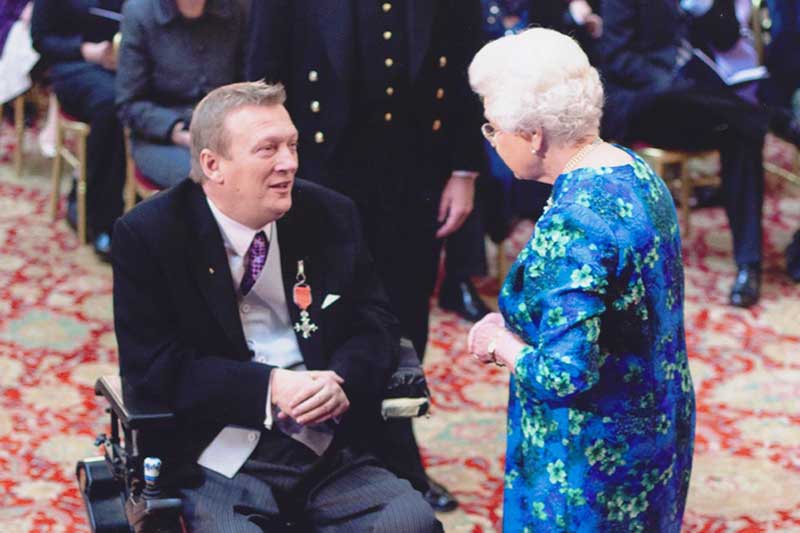 Awarded by Her Majesty, The Queen.

Honorary Belongership of the BVI 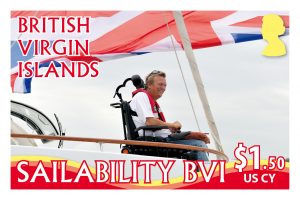 Awarded by Premier O’Neil, Premier of British Virgin Islands and presented by His Excellency, David Peary, Governor of BVI.

Yachtsman of the Year 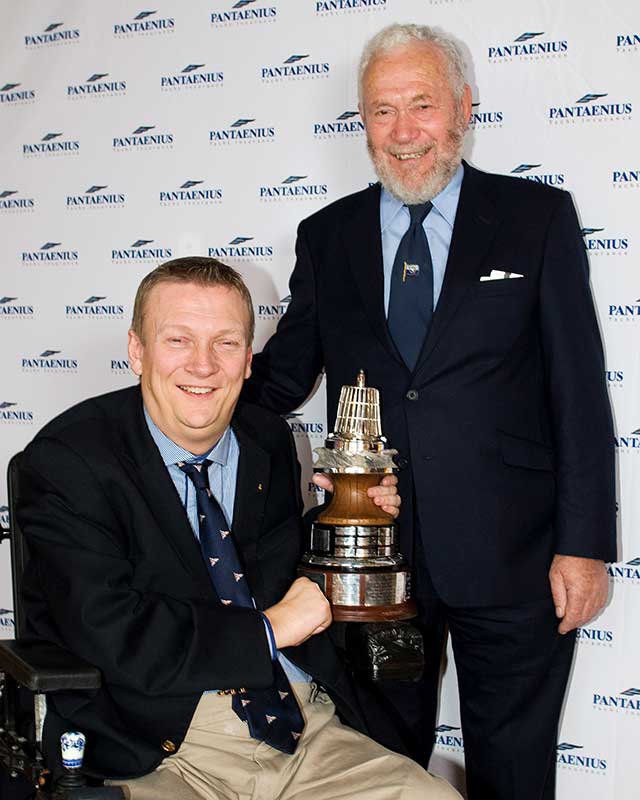 Great Briton of the Year (Winner) 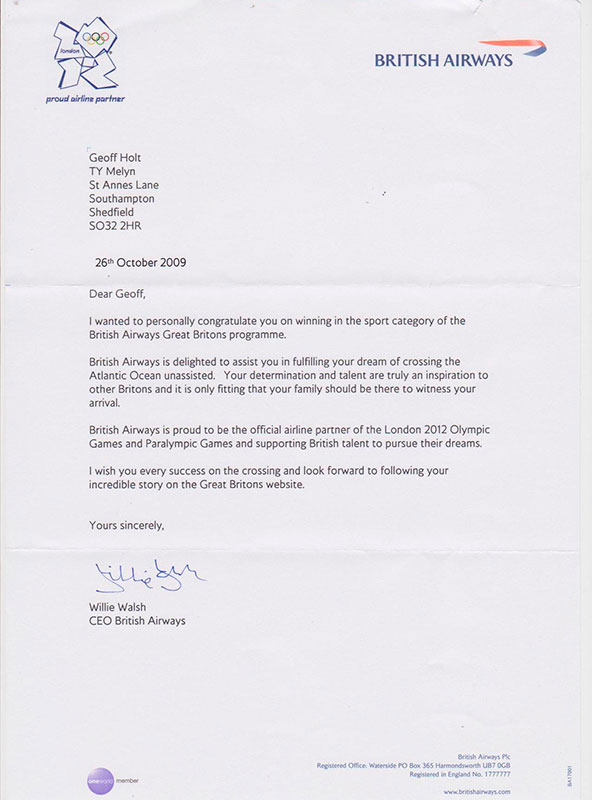 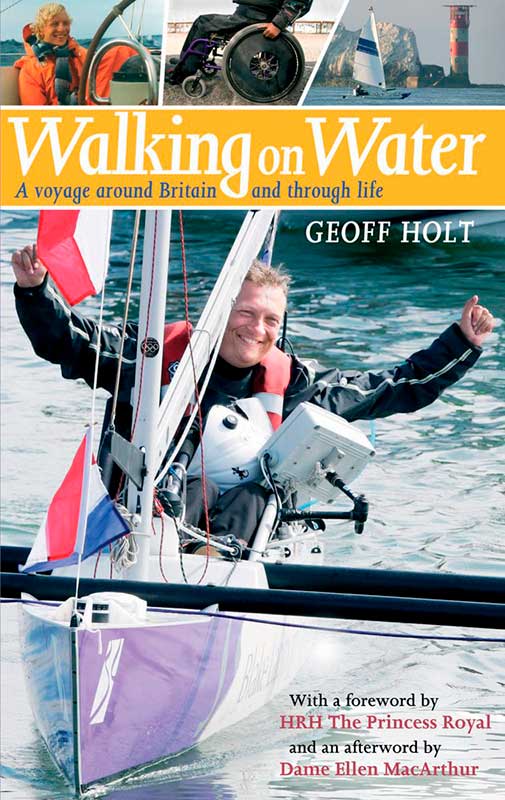 Autobiography including details of his circumnavigation around UK in 2007. Available to purchase here.

Great Briton of the Year (Shortlisted)

Awarded by the Daily Telegraph. 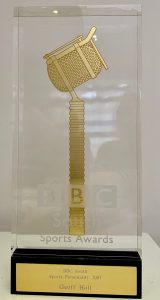 BBC South Sportsman of the Year

Quadriplegic of the Year 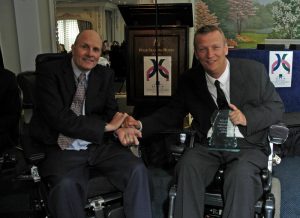 RYA Award for 'Services to Yachting' 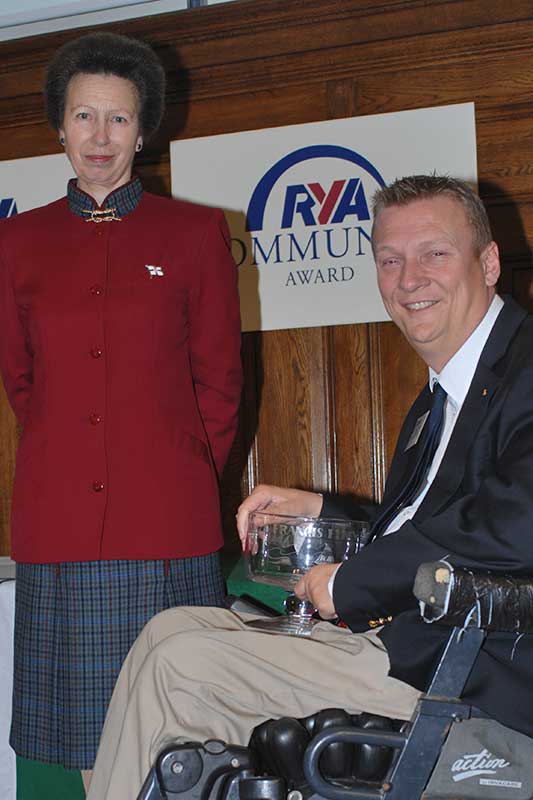 Awarded by the RYA.
Presented by HRH, Princess Royal.

Awarded by the RYA.
Presented by HRH, Princess Royal. 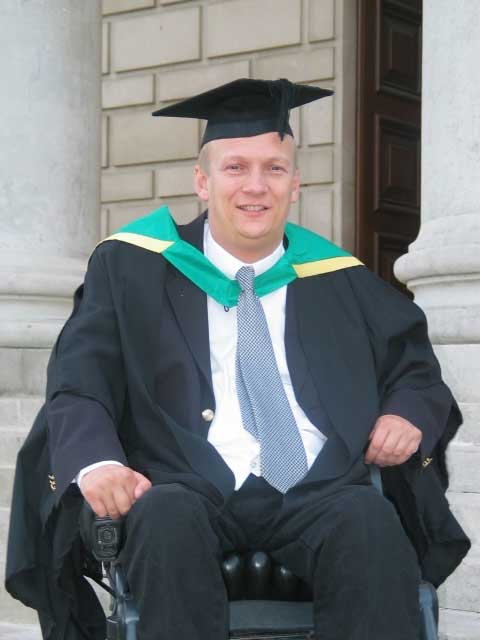