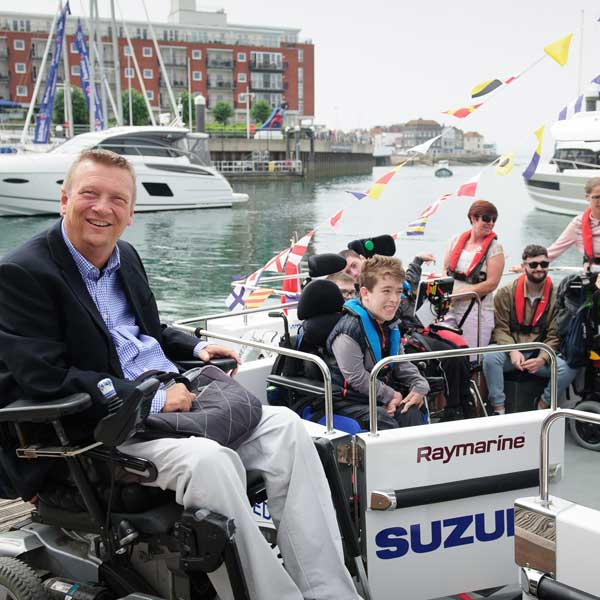 Mindworks have supported Geoff and his charity Wetwheels since inception nearly a decade ago. As a creative digital agency, Mindworks have helped shape, activate and deliver most Wetwheels’ marketing, PR and promotional events including design and print of all materials. Most recently, they have created the Wetwheels Maritime Adventures project, including all digital and printed educational materials. Mindworks have also supported Geoff personally on many of his seagoing adventures and other projects.

Suzuki Marine first supported Geoff on his voyage around Great Britain in 2007. They were a founding partner of Wetwheels in 2011 and have been instrumental in the development of the Wetwheels charity ever since. It is no overstatement to say that without Suzuki Marine, their technical and financial support, Wetwheels would not be where it is today. All Wetwheels boats are powered by twin Suzuki Marine outboard engines (between 300 Hp and 350 HP). As the Wetwheels power unit of choice for reliability they are guaranteed to give everyone who rides a Wetwheels boat, an experience they won’t forget.

Geoff’s association with Raymarine dates to the late 1990s when they provided him with essential marine electronics for his circumnavigation of the Isle of Wight in his challenger trimaran. 10 years later, Raymarine were Geoff’s marine electronics of choice when he circumnavigated around Great Britain, a voyage that took 110 days to sail 1500 miles in his 15ft Challenger trimaran. Raymarine provided all navigational and communication equipment for Geoff, his lifeboat and shore crew.

Two years later, Raymarine were to provide a complete suite of marine electronics on board Impossible Dream, the 20 m catamaran Geoff sailed across the Atlantic Ocean using his wheelchair, a 3,000 mile voyage that took four weeks.

More recently, from 2011, Raymarine have been the sole provider of marine electronics to all Wetwheels boats. Raymarine are currently working with Geoff and his team to develop a steering systems for those with very weak arm movement or unable to move their arms at all, including gyroscopic steering.

I am incredibly impressed by Geoff’s commitment to Sailability and to those who are disabled. He is the champion of Sailability and integrating people into the community.