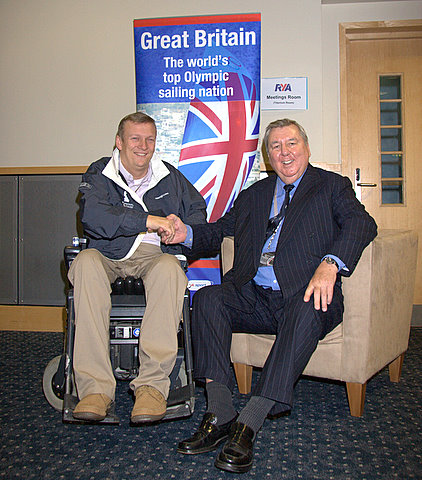 I was very saddened to learn of the passing of my friend Peter Harrison last week (18th June) and wanted to put in writing my personal condolences and memories. Many reading this may have never heard of Peter Harrison and of those that have, many may only know of him through his philanthropy and his Peter Harrison Foundation, I have had the pleasure of knowing Peter for more than 24 years and wanted to put a little more colour into his obituary. My first meeting with Peter was significant to the point it merited two pages in my autobiography. In brief, I had recently been elected chairman of RYA Sailability. It was the eve of our first major fundraising dinner held at the Royal Corinthian yacht club in Cowes on the Isle of Wight in 1998. It was about 5 PM, and I was dressed in my dinner suit, alone in the main dining room practising my speech. Our patron, HRH the Princess Royal was due to arrive within the next hour and I was stressing. In walked this large gentleman wearing foul weather oilskins who was, quite literally, dragging a wet kitbag behind him along the floor. He stopped to ask why I was in a wheelchair, what the event was all about and lots of questions about disabled sailing. He said he had been sailing during Cowes Week and the skipper of his boat was Harold Cudmore (a well-known and highly respected yacht skipper). Peter said he was soon to sell his company and would like to support disabled sailing. He did not have a business card on him but told me to look him up and make contact. He also told me his company was called Chernikeef although I only remembered that some time later, not at the time, I had more important things to worry about..! 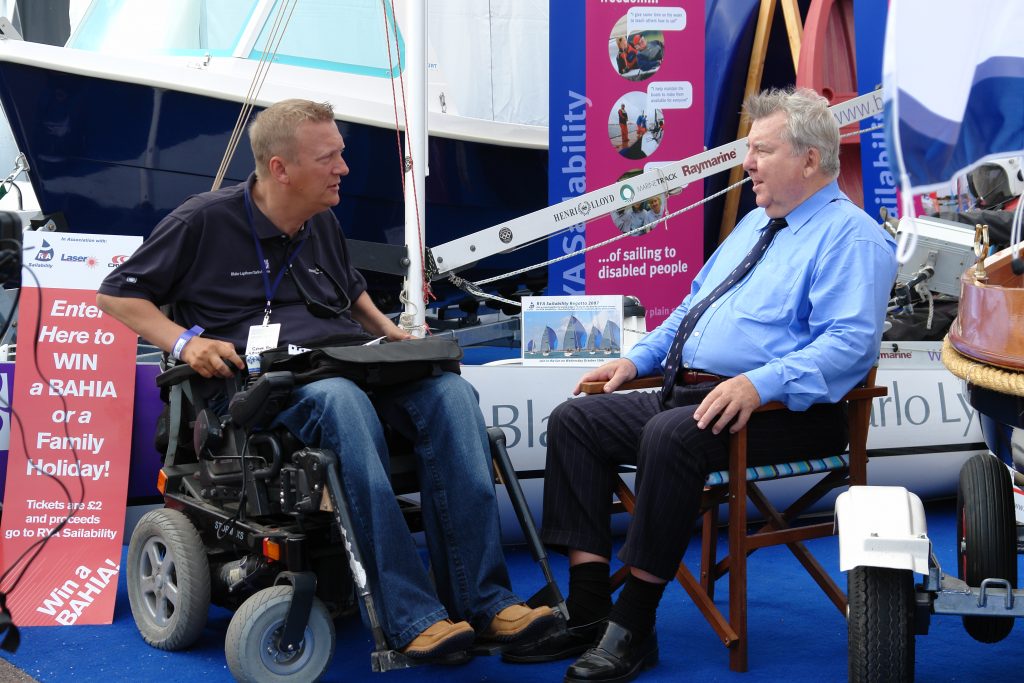 Almost a year later I was sat at my desk, reading through the daily newspapers which was part of my job in marketing at Deloitte. On the front cover of the Financial Times was a picture of Peter and the story of how he had sold his business Chernikeef to Cisco Systems for an eye watering amount of money (£300m +). It felt wrong to suddenly pick up the phone asking him to support the charity only now it was public so, feeling embarrassed, I did nothing. A couple of months later the phone rang at work and it was Peter Harrison, he had tracked me down and he asked why I had not contacted him. #Awkward

Within a few weeks we had met and he had agreed to support our national development plan for Sailability. His one request was that the first donation from his newly established Peter Harrison Foundation would be to RYA Sailability and he would like to personally present the cheque to the Princess. It would be another year before that was arranged in 2001, on the stage at Chelsea Harbour YC in London, Peter presented his first significant grant to Sailability. 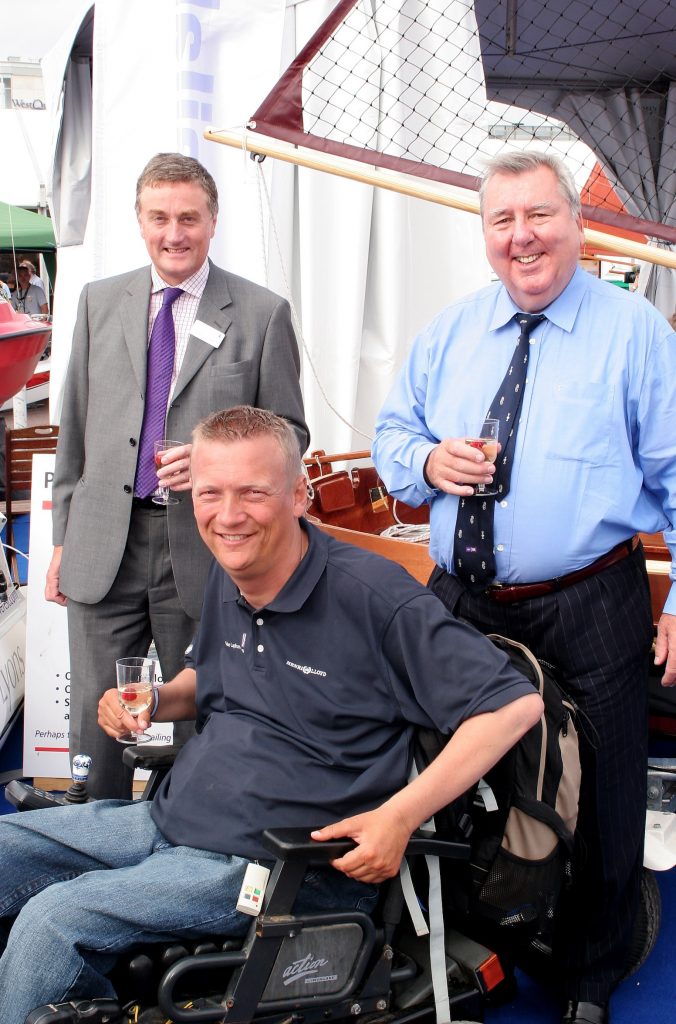 Apart from that being a turning point in the history of RYA Sailability, the reason that moment is so significant and memorable for me and my wife Elaine, is because we had only learned that morning Elaine was pregnant and we shared the news with Peter and his wife Joy. There was not a single time we met over the next 19 years when he did not ask about our son Tim. Sometime later a video was produced to showcase the work of the PFH and I am touched that he remembers that moment and he cites me personally as his inspiration for starting his Foundation. Here is the link, https://www.youtube.com/watch?v=lKemUE2QH0o go to timeline 2.00

To put the PFH in context, they have awarded more than £50 million to UK disability sport since it was founded. £50 million…! That is a jaw droppingly huge amount of money. There can be no doubt that Peter has to be the greatest philanthropist for disability support the UK has ever seen. From sponsoring the British Paralympic Association which helped team GBR win medals at many Paralympics games, to supporting thousands of charities across the UK involved in disability sport, his support has been profound, it will be his legacy. 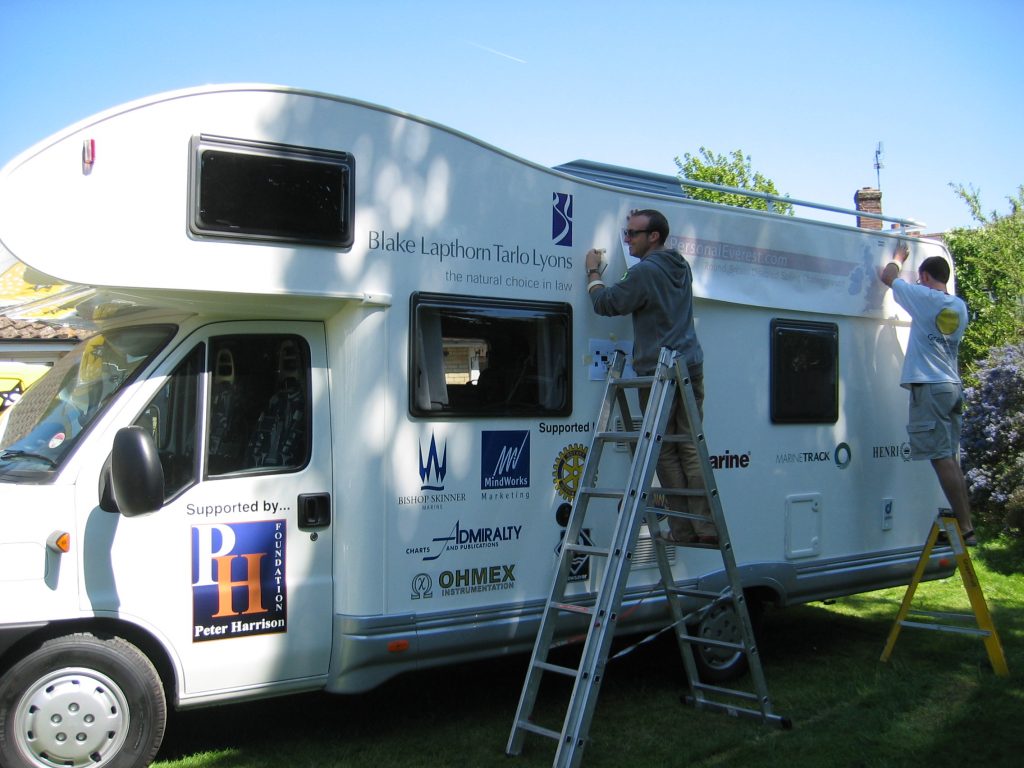 Adding the PHF logo to my round Britain motorhome

Peter helped me too, in both a personal and charitable way. He underwrote the cost of my motorhome which I used when I sailed around the UK in 2007 (I should say it was on the basis I sold the motorhome at the end of the trip and repaid him which was perfectly fine and so typically Peter, without that motorhome I would never have achieved my goal). Peter also underwrote the costs of my personal carer who looked after me when I sailed across the Atlantic in 2010. It was only a modest sum but again, I would never have achieved what I did without that support. 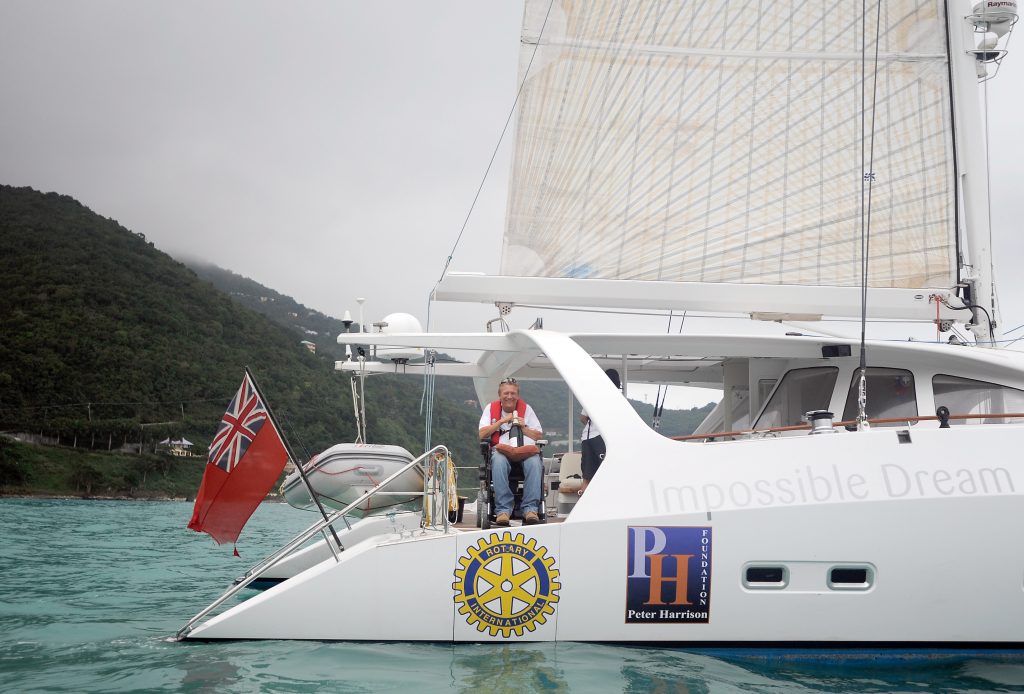 We met on numerous occasions publicly but also privately, either meetings at his home in Reigate or dinner at his favourite restaurant, Peter was always great company and happy to recount the story of his path to success to anyone who would listen…!   We both received national honours in the Queen’s Birthday Honours list in 2011, myself an MBE and Peter a CBE. We both received our awards from the Queen at Windsor Castle on the same day which was very special. I’m also personally grateful to trustees of the PHF, his family Julia, Nick and Peter, plus his team including Maria and Andrew who have been so supportive to Wetwheels; financial support that has helped Wetwheels Hamble, Wetwheels Solent and Wetwheels South-East continue our work over the past three years. 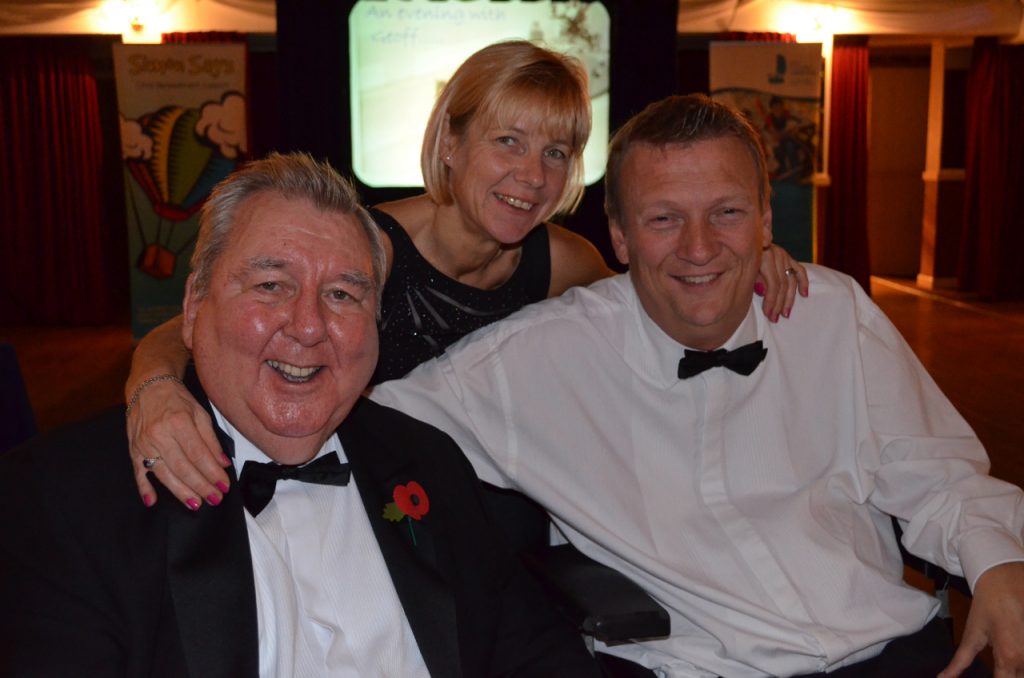 Elaine, Peter and I 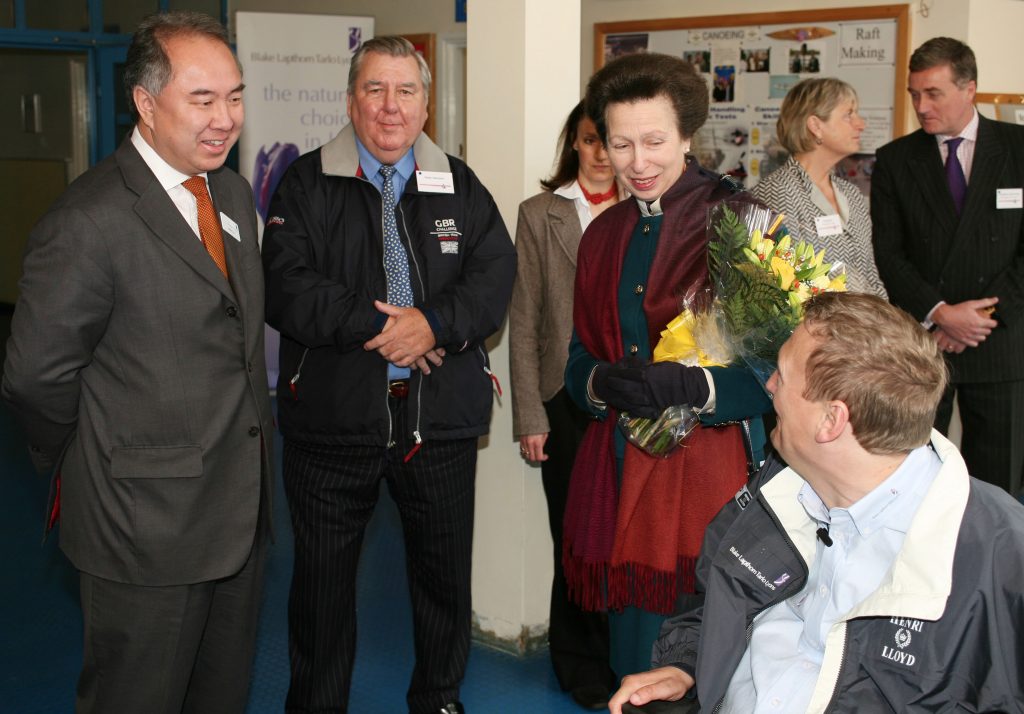 There is so much more to Peter’s life, not least his contribution to the genesis of the internet we know today (just Google the work done by Chernikeef and Cisco Systems in the 1980s in respect of Internet gateways). He personally funded the U.K.’s entry in the 2003 America’s Cup challenge, he funded the Peter Harrison Planetarium at the National Maritime Museum in 2007 and was awarded a Knighthood by Antigua & Barbuda in 2013 for personally financing the restoration of Clarence House in Nelson’s Dockyard. Much of his philanthropy has been under the radar which makes his contribution even more meaningful in my book. 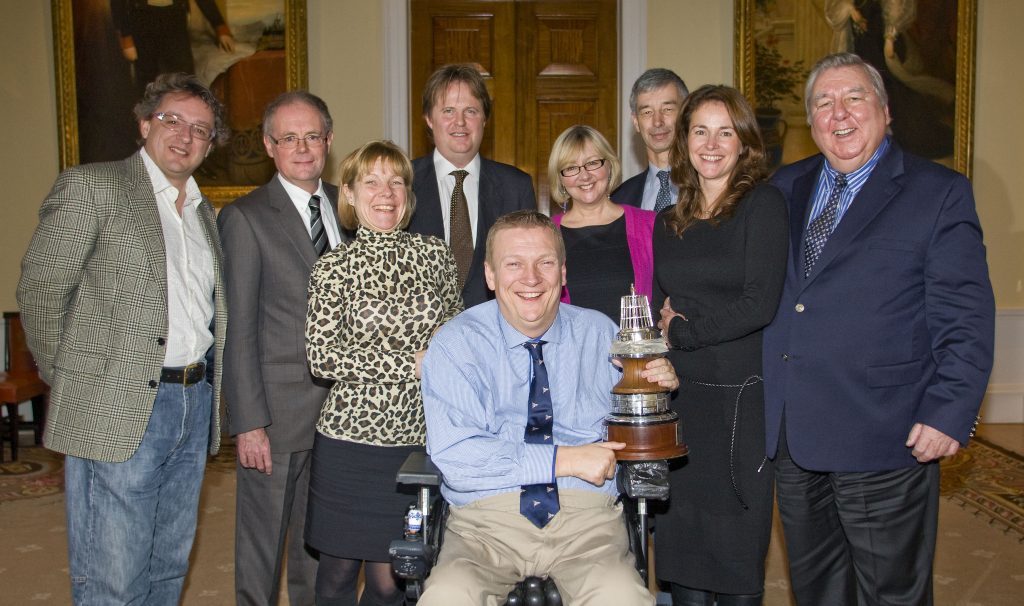 Yachtsman of the Year Awards, 2010